What is Iaido? / About the All Japan Iaido Federation

Iaido is a budo derived from Batto-jutsu or Iai-jutsu, which is classified as bujutsu. In Iaido, practitioners learn: a series of movements from unsheathing a Japanese sword to putting back the sword in the scabbard; skills through various procedures; how to improve by themselves their minds and bodies including the personality. Iaido includes various movements, such as drawing the sword from its scabbard or saya in a sitting position and placing back the sword in the scabbard, which is quite rare in the martial arts. Currently Japan is the only country in the world where such a budo is established as an independent martial art.
Each school has its own ranking system, based on which members demonstrate their acquired Kata (forms) in a given examination to achieve a certain rank and obtain the Shogo of Hanshi, Kyoshi, and Renshi.
The All Japan Iaido Federation is the only one association dedicated to Iaido, a traditional and glorious kobudo (old Japanese martial art), with the best and proudest tradition, which was founded based on the samurai spirit to hand over Iaido techniques of each school correctly to future generations. (founded in April 1954) 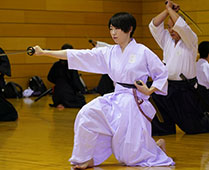 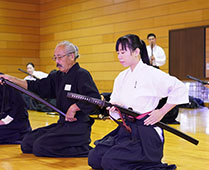 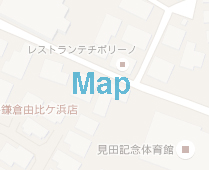 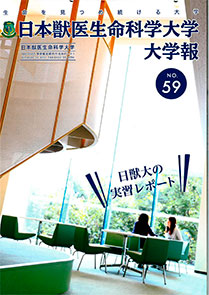